Heads up bluegrass lovers!! Here’s an event you’ll not want to miss!! 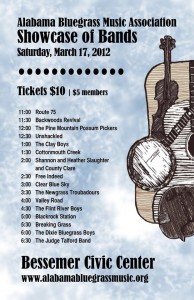 The Alabama Bluegrass Music Association will feature some of the best bluegrass bands in the state at their Showcase of Bands. It’s happening this coming Saturday, March 17th from 11am to 7pm at the Bessemer Civic Center. You’re invited to bring your instruments and jam with other musicians! Admission is $10,  or $5 if you’re an ABMA member!

And / or get more info at AlabamaBluegrassMusic.org or Facebook

If you’re a musician and don’t have perfect pitch (like me, most of my friends don’t), then you might be interested in this tuner I discovered a while back. It’s from a company called Snark. Don’t ask me where that name came from!

Yes, I know. There are hundreds of tuners to choose from. If you’re like me, you already own four of five of them! But it seems that there is always some sort of issue with them. Some you can’t see in the dark, like when you’re playing in a show setting with little or no stage lighting. Others are great in the dark but when you play an outdoor festival you can’t see it in the bright light. Some have little lights or arrows that can be difficult to see in some environments. To me, the Snark covers all the bases.

has a lighted face that is easy to see and read in the dark. It displays the note being played and has a dial of digital lights that show if the note is flat, sharp or right on. And it uses a CR2032 button battery that is pretty common and easy to find. And the price is right!

Several of my friends have the Snark Tuner and like it. I think you will be as happy with it as we are.

Big plans are in store for the area at Woodstock Festival Art Center. It’s difficult to find online information about them except for their Facebook Page. Here you’ll find “Our mission is to provide a venue for local artists of all kinds to perform and exhibit their work and bring great opportunities to our community.”

Already happening musically is George’s Woodstock Jamboree on Tuesday evenings 6-9pm, hosted by popular local musician George Scherer. George’s Woodstock Jamboree is an open mic night in a family friendly environment. Performers are offered up to 20 minutes to play and sing their original tunes or cover tunes if that is their preference… or both. Bring your instrument and/or your voice and join the fun.

Birmingham gets a rare treat this Sunday, February 26th when Lamar Morris is the guest at Small Stages. Lamar was leader of the “Cheatin’ Hearts” and “The Bama Band” for twenty years. These were supporting bands for Hank Williams, Jr. A person doesn’t hold that position for that long without being good. 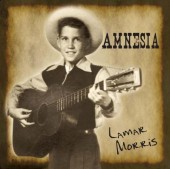 This Sunday afternoon, Lamar will perform in Birmingham at Small Stages. Get more information and RSVP at www.SmallStages.com. Lamar’s website is www.LamarMorris.com. 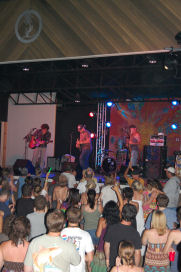 Festival Season is just around the corner. It’s time to start making plans and maybe putting in for vacation days as needed to attend your favorites! Bands are booked months in advance, so check the websites of festivals to see their lineup.

I’ve not taken a poll, but I’m pretty sure there aren’t many, maybe none, that book as quickly as The Acoustic Cafe. Their schedule for the Memorial Day Weekend 2012 Festival has been posted for months. This year’s lineup includes The Carolina Chocolate Drops, The Trishas, Larry Keel, and better every time you hear them, Dread Clampitt!!

Visit our Festivals page for a list of more of Alabama’s best! If your favorite is not listed, please let us know with an email to Info@MusicSceneAL.com so we can let others know about it, too!

Spread the word! It’s been around for years, but somehow I keep finding people that don’t know about it! You folks in Gadsden have a treasure right there in your back yard. I’m talking about MoonSongMusic Acoustic Songwriters Cafe on Noccalula Road.

Danny Moon has this really cool venue where songwriters can showcase their songs. No, this is not a noisy bar with TVs on every wall. This is an intimate listening room featuring original artists.

Get a bite to eat while you’re there! My favorite is their Cuban Bread Sandwiches. And they have assorted salads, coffee, espresso, flavored coffee, tea and soft drinks. What a bonus… NO SMOKING!!

MoonSongMusic Cafe is located at 1000 Noccalula Road, Gadsden, AL  35904. Check the website at www.MoonSongMusic.com for more information including who is playing next… and tell them MusicSceneAL.com says hello!!

Music From Home with host Dale Short is on Oldies 101.5 FM in Jasper. The show airs on Sunday at 6pm. Oh! And there’s a bonus!

If you’re not familiar with Dale Short, it might just be that you haven’t been paying attention. No, I don’t say that to slam you, but Dale’s been around these parts for a while! He’s a native of Walker County, he’s a journalist, fiction writer, columnist, public radio commentator, playwright, multimedia producer, and teacher. So, you see, it’s possible that you crossed his path and just didn’t realize it.

You may have heard one of his “Short’s” (pun intended) on Public Radio, possibly on “Morning Edition” or Birmingham’s “Tapestry”. It’s also possible that you’ve read some of Dale’s contributions in one of several local Birmingham papers, and he has a weekly column in Jasper’s Daily Mountain Eagle.

The radio program, Music From Home, began this past June and featured Rick and Jilda Watson, two members of the popular local folk trio The Overalls, and Oakman native Michael Cannon. The show boasts that they play “all local music, all the time!” I don’t think there is another radio program in the area that can make that claim!

Music From Home has quickly become a favored program in the area, especially for listeners that are interested in keeping up with local artists. The bonus is that all of the past programs are archived on Dale’s web site at www.CarrollDaleShort.com. So if you miss a program on the radio, or want to hear it again, it’s available 24/7. And while you’re listening to Music From Home, you can browse Dale’s website and learn more about a remarkable local journalist, fiction writer, columnist, public radio commentator, playwright, multimedia producer, teacher… and all-around great guy!!

Folks in North Alabama have Jim Parker’s Songwriters Series in Huntsville, where there are regular opportunities to see some of the best songwriters in the business!! Shows take place at Von Braun Center Playhouse. The next show in the series is Friday, February 3rd, beginning at  6:30pm with John Ford Coley, Roxie Dean, Byron Hill and special guest Don McNatt.

Visit Jim’s website at www.JimParkerMusic.com, and join his email list to get updates on future shows and what’s happening in his world. On his site you’ll also find links to past shows and lots more!!

Hang on… let me check. Yes, The Acoustic Cafe is listed on the “Festivals” page of MusicSceneAL.com. The list is in alphabetical order. However, if I were to list them in order of preference, in my book, The Acoustic Cafe should be at the TOP of the list!

To be fair, I have not attended all the festivals on the list, and comparing the festivals is sort of like comparing apples to oranges. For example, The Opp Rattlesnake Rodeo has music, but catching rattlesnakes is NOT the main attraction at The Acoustic Cafe.

The Acoustic Cafe started back in 1996. In the early years, there were two shows each year… one in the Spring and another in the Fall. The past few years have had one show each year on Memorial Day Weekend. Well, yes, there was a second show in the Fall of 2010. I guess we’ll all have to keep an eye on the website to see if there will be a second show this year as well. But maybe that’s getting the cart before the horse.

This year’s Memorial Day Weekend show will include Carolina Chocolate Drops, The Trishas, Dread Clampitt and lot’s more. Check the page for a full list of fabulous artists on this year’s lineup. While you’re at it, check out everything about the festival. Those of you who have been in the past already know why I would list them at the TOP of the list. If you’ve never attended, you are in for a wonderful experience!

Hop on-board and we'll send a note when there's an update!!
Follow @MusicSceneAL